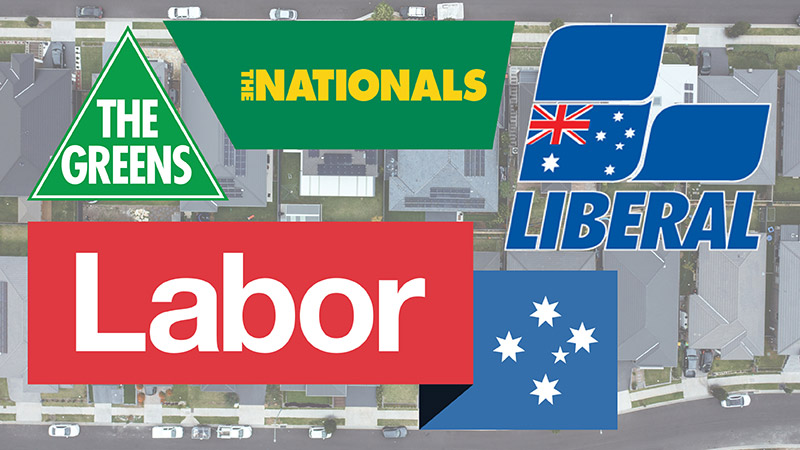 With property issues again shaping as one of the key election issues for many Australians, API Magazine takes a look at the property and housing policies being put forward by the main contenders.

The federal election has been called for 21 May and more than a quarter of voters are still undecided about who will get their vote among the 38 parties vying for attention and ticks on ballot papers.

For every contesting party, there are three times as many issues that will decide each voter’s choice at the polls.

Property issues, including affordability, tax and incentives, are again shaping as one of the key election issues for many Australians.

The previous 2019 election was heavily influenced by property issues, where negative gearing took centre stage as one of the key differences between the major parties.

Labor lost that campaign and have since abandoned any plans to remove the tax offset from their policy platform. Neither they nor the Liberal-National Party coalition will tackle reform of negative gearing.

In its place, affordability has taken its place in the property policy spotlight.

In the past 25 years, home ownership and affordability have plummeted.

In Sydney, median house prices are now a staggering 15 times more than the average household income. Sydney, Melbourne, Adelaide, Brisbane and Perth were recently ranked as the 2nd, 5th, 14th, 17th and 20th least affordable cities in the world respectively.

Rising interest rates could exacerbate that situation even further.

For those without their own home, rents have soared, up just this year by 11.8 per cent nationally, because of a record low number of available rental properties in a crisis that analysts predict is set to worsen.

So, it is little wonder property issues and policies will again be the determining factor for many voters when it comes to rolling up to the local school, hall or post office to cast their votes.

Most of the 38 parties have property policies but only the coalition Liberal-National alliance, the Australian Labor Party (ALP) and potential balance of power holder, The Greens, have the influence to shape the sector.

Here is an outline of what each of these three parties promises to deliver if it gets to dictate policy for the next four years.

The pivotal policy of the Coalition revolves around the First Home Guarantee. The scheme allows mainly first-home buyers to get a mortgage with a low deposit of between 5 per cent and 20 per cent of the value of the property. One scheme for single parents requires only a 2 per cent minimum deposit.

Announced in the recent federal budget, the plan is to support first-home buyers by:

At the other end of the age spectrum, the Coalition has targeted older voters.

Australians over 60 who want to downsize can now make a non-concessional contribution of up to $300,000 into their superannuation fund from the proceeds of the sale of their principal home.

This helps older Australians who want to downsize and helps to free up housing for those who are looking for a larger home for a family.

Labor has sought to address the election focus on housing with a pledge to create a $10 billion Housing Australia Future Fund that will build 30,000 new social and affordable housing properties in its first five years, and a policy to support first-home buyers in regional areas.

The focus on those left behind adheres to traditional ALP values, with an expectation that the fund would support:

In the first five years, these investment returns would be expected to fund:

A total of $1.7 billion dollars would be allocated to women, including $1.6 billion for long term housing, on top of the aforementioned $100 million.

Labor’s Regional First Home Buyer Support Scheme would provide a government guarantee of up to 15 per cent for eligible first home buyers, so locals with a 5 per cent deposit could avoid paying mortgage insurance, saving up to $32,000.

The establishment of a Federal Housing Trust would:

Funding for the trust would come from “making billionaires pay more tax and scrapping handouts to property developers and speculators.”