Some of the most qualified commentators on Australian finance shared with API Magazine their views on the war in Europe and its ramifications for Australian consumers and the economy.

It has taken a war in Europe and the resultant humanitarian crisis to push the pandemic from global headlines and bring even more economic uncertainty to the world.

As with a pandemic that at one point seemed restricted to China, Russia’s incitement of war against Ukraine is having an impact well beyond Europe.

Australians are already being squeezed at the petrol pump as international sanctions on Russia’s economy pile up, with fuel prices hitting new records.

Central banks, including the Reserve Bank of Australia (RBA), are weighing up their interest rates strategies as inflation pushes and pulls at prices and it’s uncertain how effective they can be at contending with this crisis.

These same inflationary pressures will have an impact on homeowners as rising interest rates and building material cost hikes take hold.

“If, as expected, inflation pushes this beyond 70 or 75 per cent of budgets, that’s people spending less on renovations, delaying home purchases and no taking holidays,” he said.

He said food costs were likely to be hit as hard as fuel prices, given Ukraine and Russia combined account for 25 per cent of global wheat exports, and Ukraine alone for 13 per cent of corn exports.

“Bread prices are already up 37 per cent since the start of the year and petrol is above two dollars a litre and these costs must be passed on to consumers.

“The war in Europe is in the food bowl of the continent, and when you throw in the effect of floods in eastern Australia agriculture-related costs are going to soar.

“Renters in Australia currently average $160 to $200 for their weekly shop – this is set to rise to $175 to $225 and this hits everything, from the rental market to discretionary retail,” Mr Lucas said.

It is probably a good idea to fix at least part of your mortgage now.

David Plank, Head of Australian Economics at ANZ Research, told Australian Property Investor Magazine that all signs from the RBA point to rate increases later this year, once the RBA is satisfied that wages growth has accelerated in a sustainable fashion.

Sanctions against Russia will have a fantastically disproportionate impact on the Australian economy.

But Russia is the world’s largest oil exporter and third-largest oil producer.

Losing this supply on the world market would have major implications for inflation everywhere, but for the RBA the usual response of raising interest rates to suppress prices is unlikely to work in this scenario.

“The recent rising inflation in Australia is mainly due to supply chain disruptions.

“Australia has experienced shortages of durable goods, raw materials and more because of Covid and now Russia’s invasion of Ukraine has put further pressure on the supply shortage.

“Unfortunately, a higher official rate will not solve the supply chain problem and hence will not ease this type of price pressure,” Associate Professor Huangfu told API Magazine.

She did, however, add that if rising inflation has become a real concern for the RBA, then conventional monetary policy should still be implemented.

Ms Huangfu said it was highly likely commercial banks would increase fixed and/or variable rates at least once more this year.

“As a monetary economist, I will not be surprised if the RBA raises its official rate later this year.

“It is probably a good idea to fix at least part of your mortgage now.”

Mr Plank agreed that while the initial impact of conventional monetary policy may be minimal, the RBA still had to act.

“The usual approach for monetary policy is to look through the first-round effects on inflation caused by supply side disruptions,” he said.

InvestSMART’s Mr Evans was more specific about his RBA expectations.

“The RBA has held for as long as possible and based on the wage, inflation and GDP data they will have at their disposal by November, I’m expecting a rate increase on Melbourne Cup Day (first Tuesday in November),” he said.

As Ukraine and Russia’s forces clash, competing forces are also at work in the Australian economy.

As a major commodities and food exporter, there are potential counters to inflationary pressures.

Russia is a major exporter of oil, grain and many other commodities including metal and energy. Restrictions on their export will substantially reduce the supply of these commodities.

“Given the importance of oil and commodities in production and manufacturing, these high prices will contribute further to rising inflation in Australia, Associate Professor Huangfu said.

But an expected offset may come in the form of the Australian dollar.

Usually prone to depreciation in times of global turmoil, the war in Europe may prove to be a break in the currency’s perception as a guest only invited when times are good.

The value of Australia dollar against US dollar has risen 5 per cent since the end of January.

“This is a direct result of the tough trade sanctions on Russia,” Ms Huangfu said.

“Russia is a large exporter of many key commodities globally, so the Australian mining companies and agriculture sector benefit directly from the trade restrictions on Russia as the world is increasingly looking for alternative sources of supply. 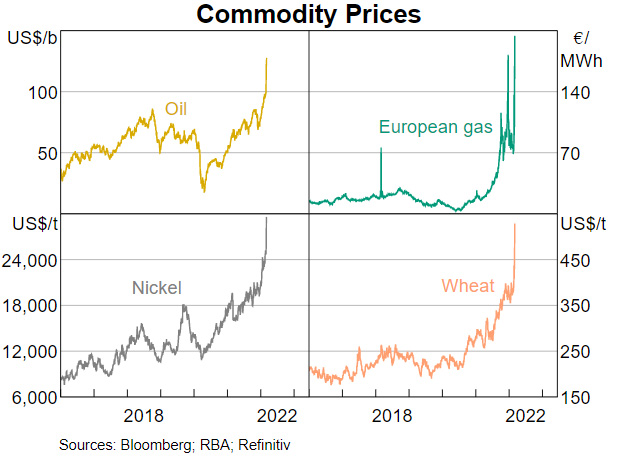 The final word should go to the RBA itself.

RBA Governor Philip Lowe on Wednesday (9 March) said Australia was in a different situation to countries in Europe.

“In Europe, this rise in commodity prices represents a negative shock to their terms of trade and thus to their national income and this alone will cause a slowdown in economic activity and CPI inflation to be higher than it would have otherwise been,” he said.

“Australia is in a different position because we export many of the commodities whose prices are rising.

“This means that our terms of trade will rise over the months ahead, which will provide a boost to our national income.

“This boost is likely to be evident mainly in the form of higher profits for companies in the resources sector and higher tax revenue.

“At the same time, the rise in global oil prices is causing higher petrol prices at the bowser and this will eat into household budgets, push up costs for many businesses and crimp spending in some areas.

“Given this, I expect that most of this extra national income will be saved, rather than flow through into higher spending.

“Looking beyond the impact on commodity markets, the war in Ukraine poses other significant downside risks for the global economy.

“From both a humanitarian and economic perspective, there is a lot riding on how events develop here.