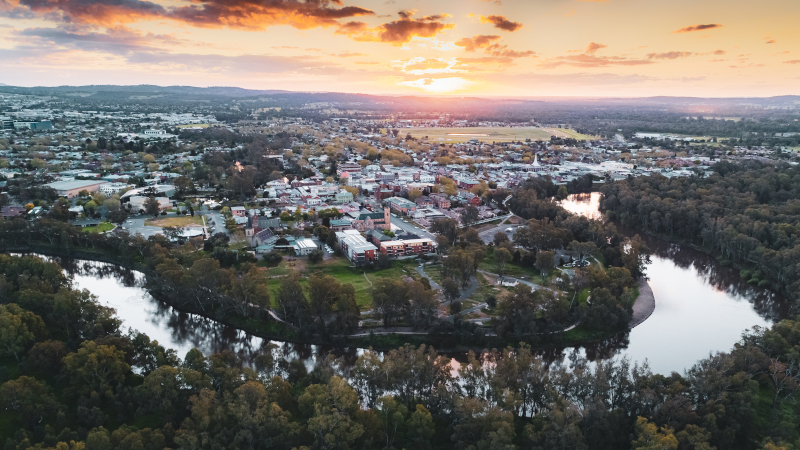 Regional New South Wales has been forecast to compete with South East Queensland to become Australia’s hottest property market – find out which towns have the brightest prospects and what it will cost to invest there.

While South East Queensland has deservedly been hogging the headlines as Australia’s hottest property market, a nearby rival is emerging to challenge it for the crown.

New research by Canstar and Hotspotting has highlighted regional New South Wales’ potential to become the best performing property market in the nation in 2022.

The report found a vast majority of towns in regional NSW recorded growth in median house prices in the latest quarter, while 72 per cent of suburbs and towns outside of Sydney have vacancy rates of below 1 per cent.

Around 75 per cent of regional NSW locations have increased weekly rents by more than 10 per cent in the last 12 months, while significant infrastructure projects such as the Pacific Highway upgrade and the Inland Rail Link are pushing up values in towns along the routes.

Report author Terry Ryder said the high ratings across all five metrics were unsurprising for New South Wales, which has recorded elevated levels of residents shifting from Sydney to the regions since the onset of the pandemic.

The research unearthed capital growth potential in a mix of locations close to Sydney, including the Central Coast, as well as far flung towns such as Wagga Wagga, Dubbo, Singleton and Cessnock.

“The first locations to benefit from new population and new real estate demand were lifestyle locations close to Sydney including the Central Coast, the Southern Highlands, Wollongong and the towns of the Shoalhaven region, and the Blue Mountains,” Mr Ryder said.

“More recently, the trend has expanded to include more distant regional areas that offer lifestyle benefits at prices enticing to Sydney buyers.

“These include Lake Macquarie and the Hunter Valley outside Newcastle; coastal centres such as Port Macquarie, Coffs Harbour, Port Stephens and the South Coast towns; and inland regional centres such as Orange, Bathurst, Mudgee and Dubbo.”

Nearby centres such as Mullumbimby and Suffolk Park have posted similarly strong gains in the past 12 months, with median home values rising at a rate of 29 per cent and 31 per cent, respectively.

But Mr Ryder said the exceptional growth also stretched right across the state, to remote locations such as Glen Innes (up 30 per cent), Dungog (up 24 per cent), Forbes (up 21 per cent), Howlong (up 25 per cent) and Moree (up 34 per cent.)

“Bear in mind not all regional areas will come with an affordable price tag,” Mr Ryder said.

“This is where it’s important to consider the growth potential, rental yield and secure a low rate loan to ensure the investment stacks up.”

Sources: CoreLogic, SQM Research, Canstar
*Up front costs include stamp duty, mortgage registration and transfer fees
^Mortgage repayments based on a 30-year loan amount for the median property price minus 20% deposit, at an average variable rate of 3.2%, making monthly principal and interest repayments.

Markets such as Blue Haven, Toukley and Gwandalan offer some of the most affordable options on the Central Coast, with Mr Ryder highlighting rental yields in Blue Haven typically sitting above 4 per cent.

“It’s a very similar story at Gwandalan and Toukley, with demand from city buyers seeking a lifestyle at attractive prices a key factor,” Mr Ryder said.

“Locations such as Toukley thrive on their easy access to a variety of water environments including ocean and lakes.”

In the Hunter Valley, buyer demand is being driven by two factors – an affordable and desirable lifestyle as well as major new infrastructure projects.

Mr Ryder said sales activity in Cessnock had doubled in the past 12 to 18 months, while rents were rising sharply due to ultra-low vacancies.

An in-demand lifestyle region is emerging close to Newcastle in the Lake Macquarie local government area, with prices spiking on the back of rising buyer demand in Warners Bay.

“Warners Bay, which fronts the lake but is only 15 kilometres from the Newcastle CBD, is the second largest population centre in the Lake Macquarie LGA and is a hub for water sports and recreational activities.”

Rental vacancies are also scarce in Karabar, with many attracted to the town due to its proximity to the nation’s capital, being just 15 to 20 minutes away from the Canberra CBD.

Mr Ryder said Goulburn was another location benefiting from its strategic location between Sydney and Canberra.

“With a median price of $450,000, Goulburn is significantly cheaper than Canberra where the median house price is above $900,000 – and many people buy in Goulburn and commute to jobs in the national capital,” he said.

“Goulburn prices are destined to rise because sales levels have increased from 100 per quarter 18 months ago to around 200 now.

“With vacancies under 1 per cent, rents also are rising.”

Mr Ryder said there were few markets in regional Australia that were as “steady and dependable” as Dubbo, where homes have a sub-$400,000 median price and the rental market is tight at 0.7 per cent vacancies.

“The strength and diversity of the local economy ensure steady demand for real estate,” he said.

In the Riverina, Wagga Wagga is a bright spot due to a strong infrastructure spend complemented by several major military bases, which are undergoing expansions.

“The suburb of Tolland has rental yields above 5 per cent and affordable sales prices – which are destined to rise as buyer demand increases, boosted by a major expansion of local medical, transport, resources & energy infrastructure,” Mr Ryder said.