House price growth across the combined capital cities is 10 times slower this quarter compared to last, suggesting the property boom is on the cool down.

Despite a slowing market, combined capital median house prices are at a new record high of $1.07 million.

Units across the combined capital cities declined (1%) for the ﬁrst time since June 2020, recording a median price of $616,942.

Regional Australia is outperforming the cities for house price growth as the regional median house price increased by 3.1% over the last quarter and 20.8% annually.

Perth has achieved a new record high house price for the ﬁrst time since 2014.

Brisbane and Adelaide are the only cities to have record-high unit prices, while Sydney, Melbourne, and Hobart units fall from the record high achieved in the previous quarter. This is the ﬁrst time unit prices have declined in Sydney and Melbourne since mid-2020.

House price growth across the combined capital cities is 10 times slower this quarter compared to last, suggesting the property boom is on the cooldown, according to Domain’s latest Quarterly House Price Report.

This easing in the market is being seen despite house and unit prices continuing to hit quarterly record price highs across a number of capital cities largely due to the slowing of price growth in Sydney and Melbourne.

These latest quarterly statistics could ease some of the pressure particularly for ﬁrst home buyers, with annual growth being at a 12-month low.

While each city’s ﬁgures vary, we’re seeing Australia settle into a ‘new normal’, including increased interstate movements, ease of restrictions and return of international workers, which is prompting shifts in the property market.

House price growth in Melbourne and Canberra is declining, while Sydney’s rate of growth is ﬂatlining after an extreme property boom.

When paired with increasing supply, these current dynamics will help ease competition between buyers.

While we’re seeing cities such as Perth, Brisbane and Adelaide hitting new records with house prices, overall, the Australian property market is on the cooldown after incredible growth in recent years. 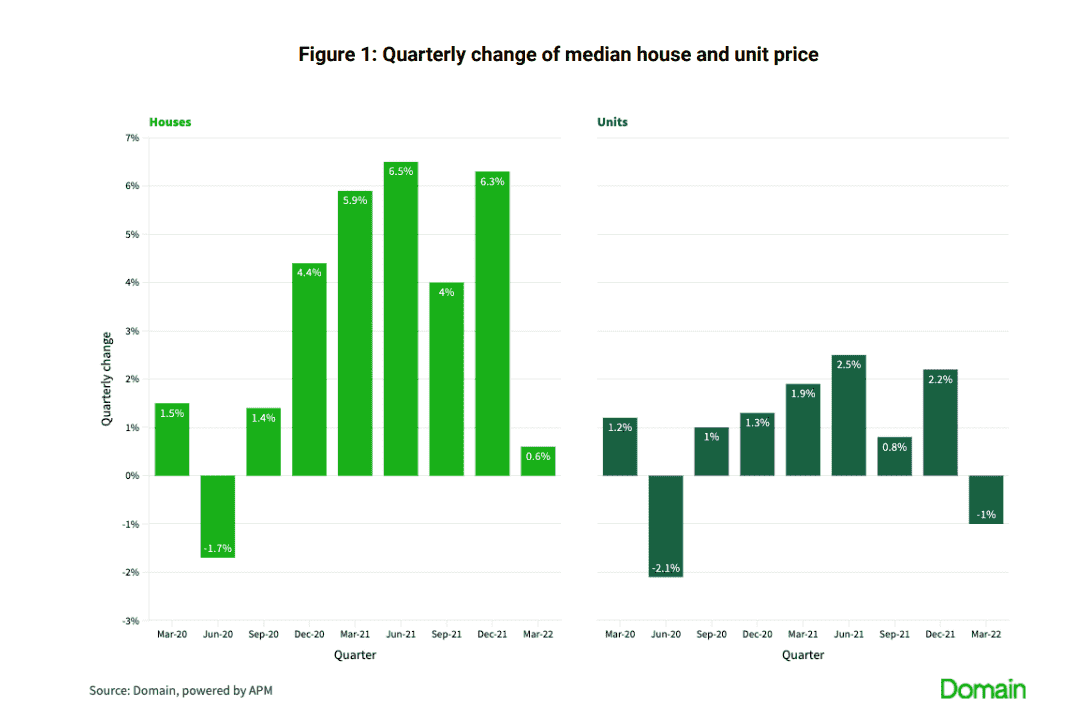 Australia’s capital cities are now operating at multiple speeds, with Brisbane and Adelaide recording the strongest rates of growth while Sydney, Melbourne and Canberra have the greatest weakness.

This is the weakest outcome since prices declined in the June quarter of 2020, slowing the annual growth rate to a 12-month low, at 21%.

Despite losing greater momentum Sydney house prices continued to outperform units in the last quarter and have grown over four times faster annually, a disparity that retains a record price gap between the property types.

Flattened house prices and declining unit prices has made Sydney’s price growth rate one of the most signiﬁcant slowdowns of all the capital cities.

A year ago, house prices were rising 46 times the current pace, and at the same time unit prices were also increasing.

This indicates that Sydney’s steepest upswing on record has ended and swinging power back towards buyers creating better purchasing conditions by providing buyers time to contemplate rather than compromise, and ultimately allowing rational decisions to be made.

Sydney’s upswing was driven by a lack of supply paired with strong buyer demand, but the supply-demand dynamics have been shifting.

2022 has seen the highest number of newly advertised homes for sale over a March quarter since 2014, soaring 15% above the ﬁve-year March quarter average.

Sellers have become motivated and  are strategically timing a sale while prices are at or are close to a peak and prior to a tightening rate cycle that will impact borrowing capacity and the cost of a mortgage.

It is worth noting that affordability is already having an impact on upgraders and ﬁrst-home buyers as the value of home loans ease from the 2021 peak.

This changing balance is slowly rippling across Sydney with sellers having to be more realistic with pricing and cautious buyers are armed with greater choice. 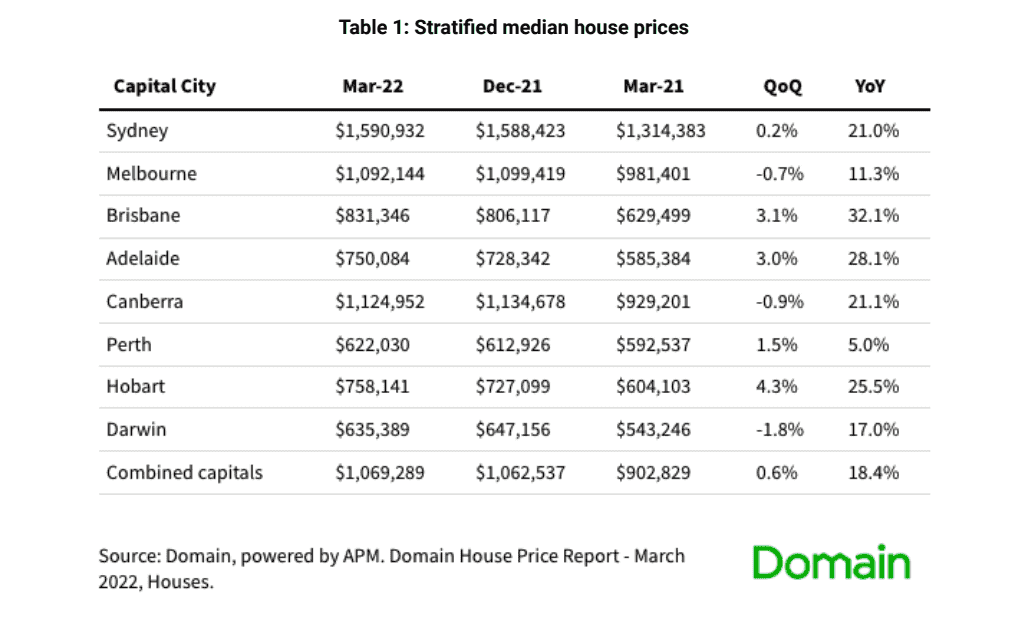 Melbourne house prices recorded the ﬁrst decline since the June quarter of 2020, with a decrease of 0.7% which slowed the annual growth rate to a 12-month low, at 11.3%.

Unit prices also declined by 2.2% over the last quarter, marking the steepest negative moderation over a quarter since 2017.

House prices have grown over seven times faster than units over the past year, with median house prices at 89% above the median unit price and retaining a record price gap between property types.

The availability of homes for sale is building, with the total supply sitting 8% above the ﬁve-year March average and continuing to improve buyer choice.

“Buyer demand is softening in Melbourne, with the value of new owner-occupied home loans sitting 10% below and ﬁrst-home loans 29% below the 2021 peak.

At the same time, the value of investment loans has hit a high in 2022.

Demand will further decrease as the prospects of interest rate hikes move closer, a tightening rate cycle will impact a buyer’s borrowing capacity and increase the cost of a mortgage.

Sellers have become motivated and are strategically timing a sale while prices are at or are close to a peak and prior to higher interest rates. 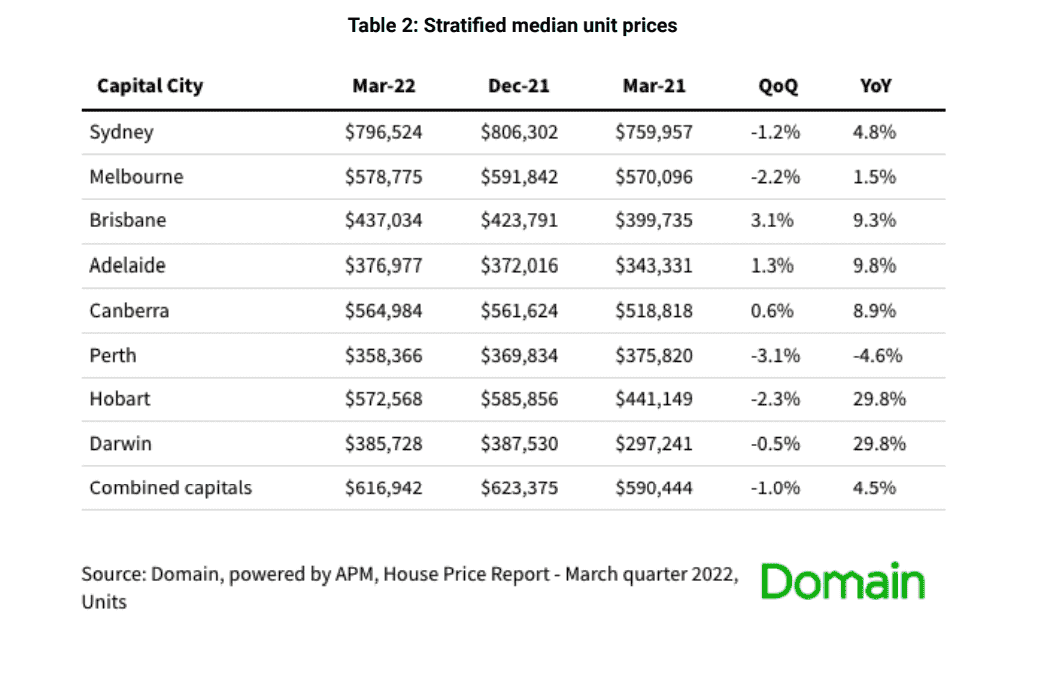 Brisbane is the fastest-growing capital city market in Australia over the past year, with median house prices and unit prices hitting new records and resulting in an annual increase of 32.1% and 9.3% respectively.

Brisbane has long been waiting for this property boom, showcasing the steepest upswing in 18 years for houses and 14 years for units.

The sheer affordability of keeping up with rapid house price gains is proving a barrier for buyers, especially for ﬁrst home buyers facing spiralling deposit goals and poor interest accrued on savings.

This has resulted in the number of home loans for owner-occupied ﬁrst home buyers falling compared to last year.

The property boom is likely to continue with Queensland recording the strongest annual population growth of all the states driven by heightened interstate migration.

This interest will be supercharged by the opening of international borders, eased social distancing rules, and high vaccination rates, particularly from young families seeking better affordability, lifestyle, work-life balance, and the expanding jobs market on offer in Queensland.

Also, the 2032 Olympic games will underpin strong infrastructure, population, and economic growth over the next decade.

However, the upswing has lost steam, with quarterly growth about four times slower compared to the previous quarter, indicating affordability constraints affecting buyers.

House prices have grown three times faster over the past year in comparison to units that have created a record price gap, with houses edging close to double the price of a unit.

The rapid price escalation will prove to be a ﬁnancial hurdle and challenge for entry buyers as well as for people looking to upgrade from a unit to a house, particularly against a backdrop of low wages growth and the increased costs of living.

Adelaide has been a highly competitive market for buyers as property choice has been problematic at a time of heightened demand.

While this remains the case, it is beginning to improve as the total supply of homes for sale is 16% above the multi-year low.

Rapidly rising house prices and the lure of a sellers’ market are  enticing homeowners.

As the supply-demand dynamics continue to rebalance, it should help to ease the ﬁercely  competitive nature that has impacted buyers throughout this price upswing.

Perth achieved a signiﬁcant milestone over the past quarter, with house prices reaching a record high of $622,030, increasing by 1.5% quarterly and 5% annually for the ﬁrst time since 2014.

On the other hand, unit prices have declined by 3.1% over the last quarter and 4.6% annually.

Despite the house price growth, Perth remains the most affordable city to purchase a house or a unit due to the city having the slowest annual growth of all the cities.

Perth’s buyer demand is soaring with the volume of properties sold over the March quarter 15% above the  ﬁve-year average.

Easing of Western Australia’s border restriction in early-March could accelerate another wave of new demand, freely allowing an easier relocation from overseas and interstate providing clarity for residents, this could create a population shift, with some residents opting to return home.

This is a trend to watch as given the timing, these drivers are unlikely to have made an impact in the March quarter.

Canberra’s house price growth has come to an abrupt halt, with a decline of 0.9% over the last quarter – the ﬁrst time house prices have fallen since March 2020.

Despite this, Canberra still remains the second most expensive capital city to purchase a house, behind Sydney.

Unit prices are slightly higher compared to the last quarter, up by 0.6%.

Conﬁdent sellers  are listing their homes for sale while conditions remain strong and prices are close to a peak in Canberra.

This is helping to shift market conditions, with the total volume of homes for sale improving from the recent multi-year low.

While supply remains tight, 30% below the ﬁve-year  March average, it is tracking higher following the ﬁrst annual increase in just over two years.

The eased conditions are evident in the Canberra auction market, with it being the busiest March quarter on record, but clearance rates dropping to 79% compared to 85% for the same time last year.

This is still an astounding result; however, it shows us that an element of buyer pressure has eased.

Hobart house prices hit a record high, with an increase of 4.3% over the last quarter.

Despite the record high house prices, the quarterly price growth is losing momentum, providing the lowest house price growth since June 2020 and negative growth for units.

Hobart’s hot property market is continuing as record-breaking house prices have been a persistent feature since mid-2020 but growth is starting to cool after it peaked in 2021.

The quarterly growth has been strongest at the entry-price point, suggesting home  hunters are trying to seek affordability.

Unit prices fell over the quarter following three consecutive quarters of extreme price gains of around 10% each.

Despite the drop, this makes Hobart Australia’s third most expensive unit market behind Sydney and Melbourne.

Darwin house and unit prices fell by 1.8% and 0.5% respectively over the last quarter, for the ﬁrst time since prior to the pandemic, despite producing the strongest rate of annual growth in roughly 17 years and the highest median price since 2015.

The dip in property prices indicates that an element of housing demand throughout the past two years was perhaps temporary.

A strong demand for Darwin’s properties can be seen with a high number of homes sold for the time of year.

Homeowners have reacted sharply to rising prices, as the number of newly listed homes for sale has risen, providing the highest volume for a March quarter since 2015.

Weakening demand at a time of rising newly advertised homes for sale has resulted in a build-up of supply, 21% higher in March compared to the same time  last year.

This is creating more options for buyers and ensuring realistic seller price expectations.

About Michael Yardney
Michael is a director of Metropole Property Strategists who help their clients grow, protect and pass on their wealth through independent, unbiased property advice and advocacy. He’s once again been voted Australia’s leading property investment adviser and one of Australia’s 50 most influential Thought Leaders. His opinions are regularly featured in the media. Visit Metropole.com.au