Rents across Australia took off in the last quarter but, strangely, rental yields actually fell.

Brisbane continues to stake its claim to being the property investors’ best friend, delivering the strongest performing rental market to complement its meteoric rise in property prices over the last quarter and the year preceding.

Highlighting the relative decline of the Melbourne rental market, 15 of the top suburbs identified as providing the best value within range of the respective capital cities were in the Victorian capital.

While Adelaide remains Australia’s most affordable capital with a median dwelling rent of $447 per week, Melbourne was only marginally pipped for Australia’s cheapest capital city to rent in, coming at $456 per week.

Brisbane was the strongest performing rental market among the capitals over the quarter, rising 2.3 per cent, followed by Canberra and Hobart, both rising 2.1 per cent.

Over a 10-year period regional house rents have increased 33.2 per cent compared to 24.9 per cent growth across the combined capitals. The regional unit market has seen rents increase 41.4 per cent in the past decade compared to capital city figures of 14.4 per cent. 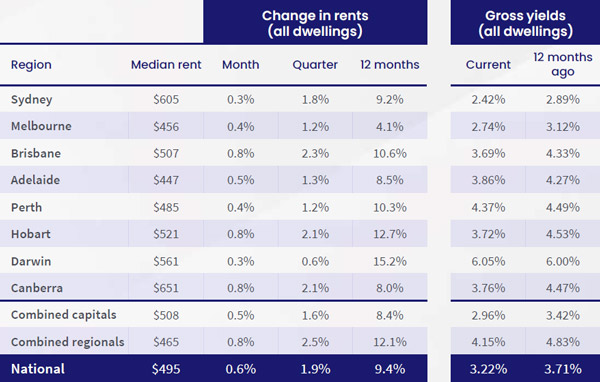 CoreLogic Research Director Tim Lawless said rents were under extraordinary pressure from many factors, not least the demand for detached housing and an ongoing lack of rental supply.

“For more than 18 months we’ve seen demand for detached housing continue unabated as more renters work from home, either on a permanent or now hybrid working arrangement, which drives demand for more spacious living conditions,” he said.

“In addition to this trend, investors, while still active in the market, have been dwarfed by an over representation of owner occupiers entering the market, upgrading or buying holiday homes that aren’t being added to the rental pool. This is also being played out in the rapid growth in regional rental markets.”

In a report commissioned by RentRabbit.com.au, Victoria dominated a list that identified the top 20 suburbs in Australia where tenants can find affordable house rents in good suburbs within commuting distance of their capital city.

Victoria dominated the latest quarterly ranking, with 15 suburbs on the top 20 list. Western Australia (3) and Queensland (2) were also represented.

All the suburbs had a median weekly rent of $405 or below, while most were located within 40 kilometres of the CBD. 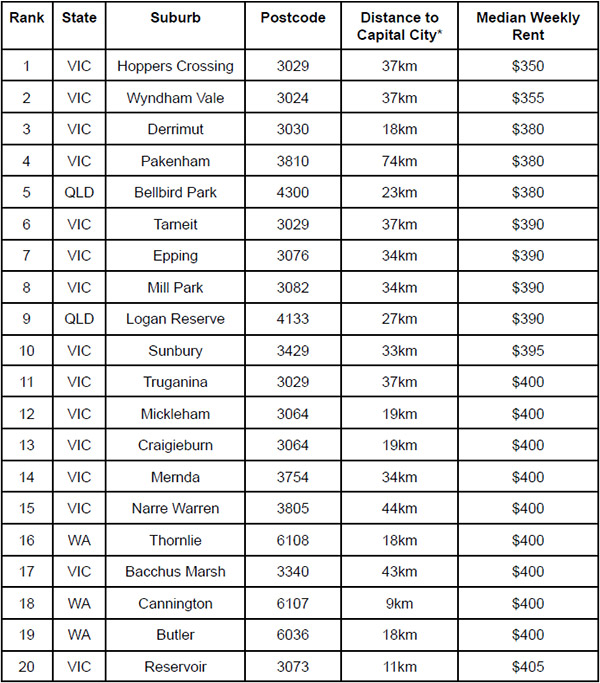 “Vacancy rates are low in many parts of Australia and landlords are responding by jacking up rental rates,” he said.

“I really feel for tenants who are being forced out of their homes and suburbs, especially when they have kids who are forced to change schools.”

He said the Tenant Opportunity Report aimed to help everyday tenants identify affordable rental markets that are liveable and commutable.

“That way, they can focus on raising their families and building their lives, without having to worry about whether they can afford to pay their bills,” Mr Pretty said.

Renters of units in inner Melbourne are facing a turnaround, with rents for Melbourne’s inner-city apartments jumping by more than 10 per cent in the past 12 months.

Yields on the slide

For renters and owners alike, the stats offered up a case of whether they wanted the bad news or the bad news.

In December, yields hit a new record low as the growth in dwelling values outpaced the rental increases. While national dwelling values rose 3.9 per cent in Q4 of 2021, rental values increased 1.9 per cent, causing gross rental yields to fall to 3.22 per cent.

COVID restrictions such as international border closures, and disruption to employment across sectors such as tourism and hospitality, which have a relatively high proportion of renters, have played a role in compressed yields.

Sydney and Melbourne have the lowest yields of any capital city at 2.42 per cent and 2.74 per cent respectively, while Darwin has the highest at 6.05 per cent, followed by Perth (4.37 per cent).

Vaucluse in Sydney’s eastern suburbs is Australia’s most expensive suburb for house rentals, with a median weekly rental value of $2,308 compared to Elizabeth South in Adelaide, where tenants pay a median rent of $317 per week.

For units, Sydney’s Point Piper, also in the city’s eastern suburbs, has the most expensive rent at $1086 per week compared to Orelia, almost 40 kilometres south of Perth, which has the country’s most affordable median unit rents at $258 per week.

Queensland is experiencing record low vacancy rates, with most regions remaining much tighter than what the Real Estate Institute of Queensland (REIQ) classifies as “healthy” (2.6 to 3.5 per cent) during 2021.

The REIQ’s Residential Vacancy Report released this week, revealed that vacancy rates got as tight as a mere 0.1 per cent in Maryborough in 2021, hovering just above zero in a record low across the history of the report.

In the neighbouring region of Hervey Bay, vacancies were sitting at 1.0 per cent in the December 2021 quarter. Meanwhile, Bundaberg (0.4 per cent) to its north and Gympie (0.3 per cent) to its south, also continued to feel the strain remaining in incredibly tight territory.

“A rental market as extraordinarily tight as this presents challenges to the local economy and to the community.

“Queensland needs additional housing supply to ease these tight conditions and accommodate the masses relocating to the state – and this supply simply can’t come soon enough.”