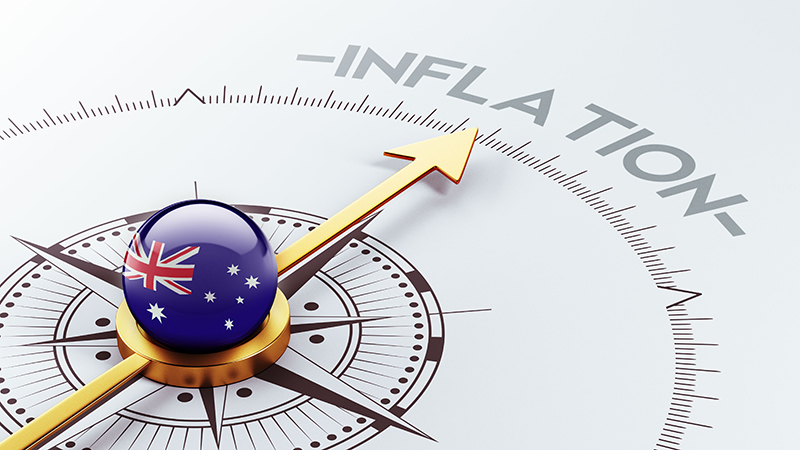 The Reserve Bank of Australia has given its strongest indication yet that the first official interest rate rise in 12 years is around the corner.

The Reserve Bank of Australia (RBA) has given its strongest indication yet that the first official interest rate rise in 12 years is around the corner.

Releasing the Minutes of the Monetary Policy Meeting of the Reserve Bank Board on Tuesday (19 April), the nine-member board said inflation had picked up and a further increase was expected to take the inflation rate above the three per cent upper limit of the RBA’s target.

What little wages growth was evident was being usurped by rising prices.

“These developments have brought forward the likely timing of the first increase in interest rates,” the minutes noted.

“Over coming months, important additional evidence will be available on both inflation and the evolution of labour costs.

“Consistent with its announced framework, the Board agreed that it would be appropriate to assess this evidence and other incoming information as it sets policy to support full employment in Australia and inflation outcomes consistent with the target.”

The RBA this month kept the official cash rate on hold at 0.1 per cent.

Members noted that inflation had increased sharply in many parts of the world because of ongoing supply-side problems, Russia’s invasion of Ukraine and strong global demand as economies recovered from the pandemic.

But the tone on the Australian economy and the financial position of Aussie households was generally upbeat.

“The Australian economy had remained resilient and spending was picking up following the setback caused by the outbreak of the Omicron variant,” the minutes noted.

“The strength of the Australian economy was evident in the labour market (with) employment and underemployment rates at their lowest levels in many years and forward-looking indicators of labour demand remained strong.

Most borrowers were unlikely to be stressed by higher interest rates.

Despite recent research revealing that one-third of borrowers are at or close to the edge of being unable to meet household costs, the RBA said they were well placed to cope with a rise in interest rates.

“Household and business balance sheets were generally in good shape, there was a large pipeline of construction work to be completed, and a recovery in business investment was expected.”

Members observed that high rates of household saving meant many households had built substantial buffers, though some households had only limited buffers. They continued to emphasise the importance of maintaining lending standards and borrowers maintaining adequate buffers while interest rates were low.

“Rising prices were impinging on households’ spending power and the floods had been very disruptive for many communities.

“Household credit had been growing faster than household incomes, although the ratio of aggregate household debt to income remained within its range over the preceding decade.

The significant increase in inflation in many economies and expectations of earlier central bank tightening had caused market interest rates to rise in the period since late 2021.

The RBA noted that, as a result, some financial asset prices had declined.

“These price falls had been orderly (and) there had not been any notable declines in residential or commercial property prices.”

Foreign investors continue to turn away from Australian residential real estate but overseas buyers remain active in buying and selling commercial assets, with early signs that this trend is set to continue regardless of the election and its outcome.

Vanessa Rader, Head of Research at Ray White Commercial, said interest rates will dampen activity for some buyers, notably the smaller investor and self managed superfund buyers who have increased their spending over the past 18 months, but the overall market was set to thrive.

“While this smaller end of the market may see a period of moderation back to more normalised levels of activity, the abundance of cash-rich investors and larger trusts, funds, as well as offshore buyers’ deep pockets, will see the continued strong investment into commercial property this year,” she said.

The recently released Foreign Investment Review Board Annual Report for 2020-21 showed a 95.91 per cent increase over the year in foreign applications to invest in Australian real estate.

Commercial investment continues to be heavily weighted towards Sydney and Melbourne regions with strong volumes across all sectors notably the office market.

“The current uncertainty, particularly in CBD office markets, surrounding occupancy and rents is not a deterrent for these buyers who consider the yields on offer still competitive compared to other international markets, while the security and vibrancy of our global cities is a strong indicator of confidence and future growth,” Ms Rader said.

“Greater interest in the Queensland market has come off the back of strong population gains, notably in southeast Queensland, while the announcement of the Olympics in 2032 will do much to raise the profile of the state in coming years and draw greater interest.”

The RBA noted that labour shortages were also wreaking havoc with the construction sector, affecting residential and commercial development.

“The rollout of past (construction) commitments had been constrained by industry bottlenecks and there were risks of further delays owing to capacity constraints (and the) limited availability of skilled labour was one factor constraining the capacity of firms in the resources industry to undertake new capital works.”

The Urban Development Institute of Australia (UDIA) said on Tuesday that Australia needed to restore its immigration program and consider setting a new population and settlement policy that will give the industry certainty needed to tackle the housing crisis and address emerging labour and skills shortages.

“Australia has temporarily lost the powerful and critical economic boost that immigration brings to the economy,” he said.

“This massive economic hit is only now becoming apparent and needs to be caught up as quickly as possible to minimise the long-term impacts.”

Prime Minister Scott Morrison said the inability to have a skilled immigration intake over the last few years due to the pandemic has caused some labour shortages.

He told a mining leaders event in Perth this week that he expects it will take some time for the pipeline of people coming to Australia to build up again.

“I suspect we will see a great interest in people coming to Australia from eastern Europe in the years ahead,” he said.