The Reserve Bank of Australia has cited the Russian invasion of Ukraine as a major source of global financial uncertainty as it opted to keep the official cash rate on hold.

The Reserve Bank of Australia (RBA) cited the Russian invasion of Ukraine as a major source of global financial uncertainty as it opted to keep the official cash rate on hold.

The RBA has been steadfast in keeping interest rates at its record low of 0.1 per cent but sees the threat of inflation brought about by the war in Ukraine as a potential catalyst for higher rates.

As highlighted in an Australian Property Investor Magazine analysis on the eve of the invasion, global energy prices could soar and supply of a third of the world’s wheat and barley and a quarter of corn exports is at risk.

The resultant inflation on a global scale could force the RBA’s hand.

At it’s monthly Board meeting on Tuesday (1 March), RBA Governor Philip Lowe said the war in Ukraine is a “major new source of uncertainty”.

“Inflation in parts of the world has increased sharply due to large increases in energy prices and disruptions to supply chains at a time of strong demand,” he said.

“The prices of many commodities have increased further due to the war in Ukraine.

The RBA is consistent in its message that it will not increase the cash rate until inflation is sustainably within the 2 to 3 per cent target range.

“Inflation has picked up more quickly than the RBA had expected, but remains lower than in many other countries,” Mr Lowe said.

“The central forecast is for underlying inflation to increase further in coming quarters to around 3.25 per cent, before declining to around 2.75 per cent over 2023 as the supply-side problems are resolved and consumption patterns normalise.”

“While inflation has picked up, it is too early to conclude that it is sustainably within the target range.”

Westpac recently announced it expects the cash rate to reach 1.75 per cent by 2024 following a series of hikes.

Analysis by research agency Canstar shows if the cash rate rose to 1.75 per cent, the average variable interest rate would increase from 3.04 per cent to 4.69 per cent. 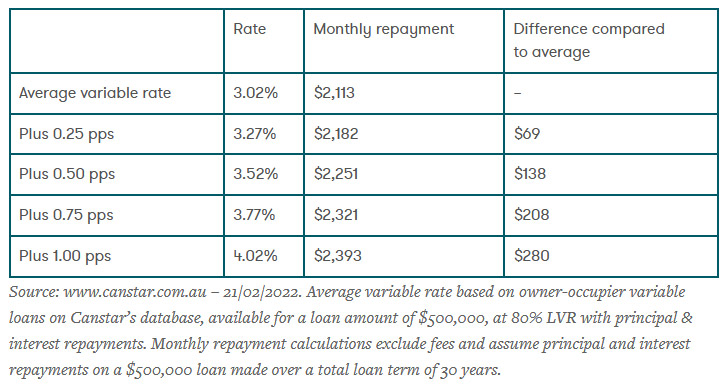 The banks are already raising rates without pausing for the RBA to catch up.

CoreLogic Research Director Tim Lawless said the RBA appears to be sanguine about housing market trends, noting housing prices have risen strongly and the rate of growth has eased in some cities.

CoreLogic’s Home Value Index, released 1 March, shows a broad-based slowdown in the rate of value growth. National housing values were up 0.6 per cent in February, the slowest monthly rate of growth since September 2020.

Sydney house prices fell 0.1 per cent for the first time in 17 months, while Melbourne prices were unchanged in the month.

According to Australian Bureau of Statistics data released on Tuesday (1 March), January reached a record month for new lending, with the total value of new loans rising 2.6 per cent compared to 4.4 per cent in December.

Investor lending rose by 6.1 per cent from December to reach $10.97 billion in January and remains up by a staggering 67.8 per cent from a year ago.

Lending to owner occupiers rose by just 1.0 per cent in January to reach $22.69 billion.

Futurerent CEO Godfrey Dinh said this record high of $11 billion for investor home loans is a strong indicator that the pandemic has done little to discourage investment activity.

“Investors have not been deterred by Sydney recording the first decline in housing values since September 2020, as they are looking at more affordable areas,” Mr Dinh said.

“Markets such as Canberra and Adelaide, where rental yield and affordability is more reasonable, are experiencing a flurry of activity and strong growth.”

“Now they will have to contend with higher interest rates, aggravating their already higher repayments on bigger loans,” he said.

“First home buyers are withdrawing from the market in the face of higher prices and stiff competition from investors.

“Just when we thought it was safe to expect a return to inflation and higher interest rates, the world has thrown new uncertainty into the mix.”