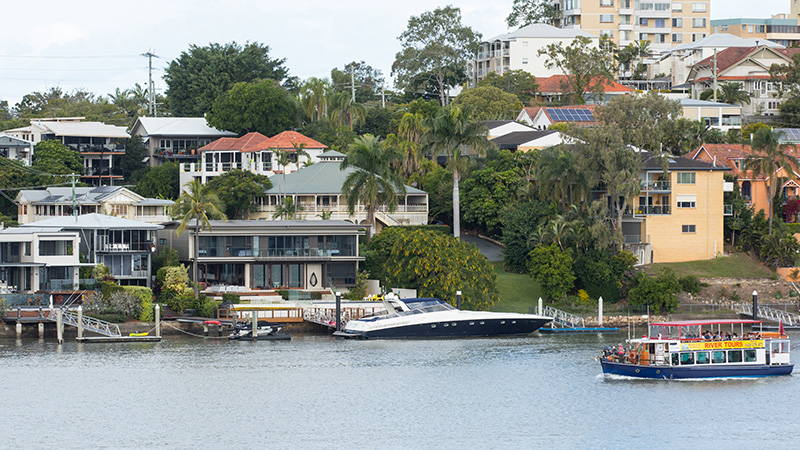 Queensland continues to lead the nation when it comes to annual growth rate for dwelling values, while Brisbane retains its position at the helm of the capital cities.The state as a whole has

Queensland continues to lead the nation when it comes to annual growth rate for dwelling values, while Brisbane retains its position at the helm of the capital cities.

The state as a whole has delivered investors and homeowners a staggering growth rate presently sitting at 29.2 per cent for the year.

The median house value in Brisbane is currently sitting just under $830,000, an increase of a further 1.9 per cent in the last month according to The February NAB Monthly Property Report.

Tim Lawless, Head of Research at CoreLogic, said Brisbane has become Australia’s strongest capital city housing market with values up 8.3 per cent over the most recent rolling quarter.

The city’s last three months of growth alone has outstripped the annual growth of Perth (8.0 per cent for 12 months) and accounts for much of what Melbourne has achieved over a year (11.7 per cent growth).

Only Adelaide has come close to achieving the growth seen in Brisbane, 26.0 per cent growth for the year and fractionally lower monthly growth.

“In dollar terms, Brisbane dwelling values have risen by approximately $127,000 over the past twelve months,” Mr Lawless said.

“Local demand is strong, being supported by a high rate of interstate migration along with (still) relatively affordable housing prices.”

But for those considering a sea change to the state, a rude awakening may be in store.

An undersupply of houses and apartments, continued interstate migration, the flood crisis, and rising construction costs are genuine deterrents in what remains a sellers’ market.

Angus Moore, an economist for PropTrack, shared his concerns for aspiring buyers.

“Competition remains tough for buyers, with the total stock of properties listed for sale still 21.9 per cent lower than a year earlier and nearly 40 per cent below pre-pandemic levels.”

The latest NAB report supported the argument that rising house values are being pushed even higher due to persistently low stock levels, while demand from owner-occupiers and investors is amplified by a high rate of interstate migration.

Growth this quarter remains in favour of houses over apartments, with house values increasing by 9.1 per cent this month and apartments at 4.2 per cent, the report said.

Source: realestate.com.au. Suburbs with < 10 listings were excluded. Data represents change in the total number of homes for sale from Feb’20-Feb’22.

However, apartments have overtaken their previous record high median value, which was set back in March 2010, remaining an affordable choice for aspiring homeowners while sitting at a relatively modest $458,000.

Real Estate Institute of Queensland CEO Antonia Mercorella weighed in on the challenges facing buyers getting into the Queensland property market.

“High levels of interstate and intrastate migration, low levels of stock, record low-interest rates, elevated levels of household savings, more flexible remote workplace arrangements than ever, and the fear of missing out, are all additional factors spurring on the rapid property price growth,” she told Australian Property Investor Magazine.

Renters looking to relocate to Queensland might also want to think again. Brisbane’s rental vacancy rates are at the lowest point since Domain records began.

Domain’s Vacancy Rates Report showed that the suburbs with the highest vacancy rates were Brisbane Inner (2.5 per cent), Sherwood Indooroopilly (2.2 per cent) and Nathan (1.95 per cent). The lowest were Mudgeeraba and Tallebudgera (0.1 per cent), Nerang (0.2 per cent) and Strathpine (0.25).

With the vacancy rate currently sitting below 1 per, this undersupply is putting pressure on weekly rent prices.

NAB data revealed that rental prices have increased by 11 per cent over the last 12 months and apartments 6.5 per cent.

Rent rises continued even last week, with SQM Research Weekly Rents Index for the week ending 12 March showing that house rents had increased by 2.2 per cent and apartments 1.7 per cent just that week.

Queensland renters considering building a home of their own may also be left disappointed, with supply chain issues and shortages being felt throughout the state and exacerbated by the floods.

“We know tradespeople and building supplies are as rare as hen’s teeth in the current market, with a pre-existing backlog of enquiries for various standard renovations, repairs and building works,” Ms Mercorella said.

“With the recent major flood disaster adding to the demand, these wait times could mean it’s some time before we see properties repaired or ready to re-join the rental or housing market.”

“This will only exacerbate the rental crisis, which means an enormous amount of stress on tenants and property managers who were already under strain over the past two years due to Covid impacts and undersupply issues.”

With Australians working from home more now than ever and space being prioritised over proximity to the city when choosing a home, the value of regional houses has grown significantly over the last 12 months.

Megan Lieu, Economic Analyst at PropTrack, said suburbs in regional Queensland made up the majority of the top 10 in regards to locations with the greatest declines in properties for sale over the past two years.

“ABS data shows that there has been strong migration into Queensland from Sydney and Melbourne, in a clear indication people are looking for a lifestyle change and more affordable housing.”