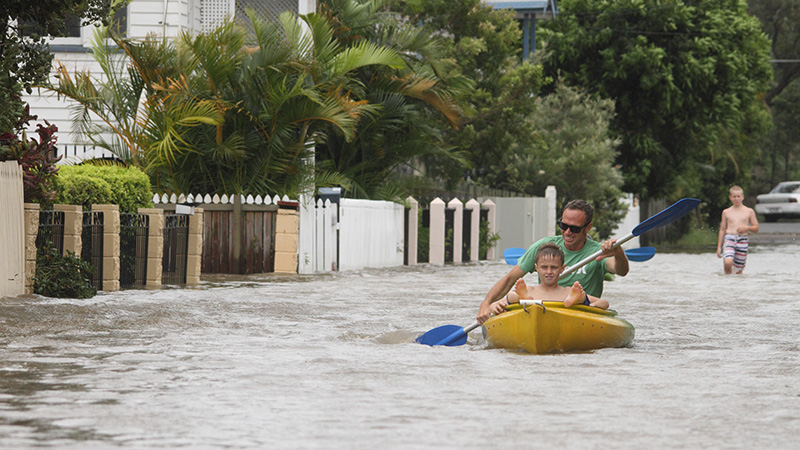 A question facing investors in areas subject to fire and flood is whether they are willing to accept the apparently greater risk of a higher frequency of natural disasters.

For the sodden residents in the town of Gympie, 170 kilometres north of Brisbane, there’s less concern for property prices than for whether the town centre needs to be moved in its entirety.

Trying to deal with the aftermath of their fourth major flood event in three decades, many are saying the CBD needs to be bulldozed and started again on higher ground.

From bushfires to floods, recurring natural disasters that were once described as 100-year events are seemingly now becoming every decade, or even more frequent, nightmares.

But for those affected by such serious and sometime tragic disasters, if the prospect of losing their house is overcome they are still faced with question marks over how they can afford to insure it and whether anyone else would ever want to buy it.

But the news is not all bad.

In the short-term, the impact invariably leads to shrinking inventory and sudden higher demand on rental properties, with rising rent prices. Property values also often fall but for the long-term usually recover and often thrive.

Mallacoota, in the East Gippsland region of Victoria, was one of the worst hit areas in the 2020 bushfires. It now has house prices that are up 70 per cent compared to where they were three years ago.

Cyclone Yasi, which slammed Queensland in 2011, caused an immediate 3 per cent dip in the median dwelling price in Townsville and prices were subdued for several years before taking off in the past few years.

The question now, however, is whether nervous investors are willing to accept the apparently greater risk of a higher frequency of natural disasters.

“Prior to the 2022 floods, the Brisbane property market was going from strength to strength, with several factors driving this, including increased migration from Victoria and New South Wales as well as the announcement of the Brisbane 2032 Olympics,” he said.

“There are several differences between the flood events that occurred in 2011 and 2022 – unlike 2011, the 2022 flood event was particularly widespread and impacted a larger geographical area and the timing between major flooding was only 11 years.

“In 2011, this gap had been significantly wider, with the previous major flood recorded in 1974.

“Climate change is predicted to contribute to further intense flooding in decades to come, insurance premiums are becoming a significant consideration and this is likely to have a greater impact on buyer sentiment in these areas than perhaps in the past.”

Nerida Conisbee, Chief Economist for Ray White Group, said the impact on property markets following current flooding will depend on how hard the area was hit.

“Places like Lismore are going to see significant housing shortages while the clean up and rebuild takes place and it is likely that it will take more than 12 months for this community to recover,” she said.

“In many previously flood impacted areas of Brisbane, this flood hasn’t at this point had the same impact as 2011.

“This is partly because flooding hasn’t hit as hard but also because it is likely that many homes have been rebuilt to withstand rising water and there has been significant investment in ensuring floodwaters don’t damage properties so significantly.”

The same factors that can present danger to homeowners are often the very ones that make living in the area so appealling.

“Places affected by natural disasters are very often in highly desirable areas and over the long term, it has a minimal impact on home values,” Ms Conisbee said.

“Areas close to rivers are prone to flooding, coastal areas are susceptible to erosion and areas in bushland can experience bushfires.

“Although more dangerous than other suburban areas, living near a river, the beach or in a bush setting is highly desirable for many buyers and this desirability tends to override the greater risk of a natural disaster.”

“Based on previous flood events around the state, we may see a dip in sale prices for flood-affected properties however, it’s also unlikely owners will sell these properties right away unless they are compelled to do so,” she told Australian Property Investor Magazine.

“For those who do sell in the immediate period, we know there are opportunistic buyers out there that will still grab themselves a bargain and hold onto it with a long-term investment view.

“History has shown that we have a resilient property market, and there is still incredible demand for housing, and now a significant proportion of available stock will be taken out of both the sales and rental markets.

“We may actually find that sale prices and rents increase due to diminished stock levels and, additionally, unaffected suburbs may attract premium prices due to their safety appeal.”