End of a low-rate era The lowest fixed home loan rate on record has been increased this week, unfortunately ending the ultra low rates we’ve been accustomed to.Greater bank lifted their 1-yr rate of

The lowest fixed home loan rate on record has been increased this week, unfortunately ending the ultra low rates we’ve been accustomed to.

Greater bank lifted their 1-yr rate of 1.59% to 1.89% for owner-occupiers paying principal and interest making 1.79% the new lowest rate on the market available from UBank, Qudos Bank and RACQ for 1 year.

Sally Tindale, research director at RateCity.com.au said it was unlikely we would see interest rates as low as 1.59% again, and that the hike from Greater Bank marked an end of an era for record-low fixed rates.

More than half of all lenders have hiked at least one fixed rate in the past two months, with only 41 fixed rates under 2%, this is expected to fall to zero (or close to) within the next six months according to RateCity.com.au.

“While we expect more cuts to variable rates in the next few months, we could see some lenders hike later this year ahead of the RBA, if the cost of funding continues to escalate.”

Home loan customers looking to secure a fixed interest rate are also being ‘trapped’ by banks that are lifting their rates before the new loans have been approved and settled according to Cara Giovinazzo, owner of Queensland finance brokerage Borro.

Ms Giovinazzo said she was receiving complaints from customers of banks increasing their rates after they had signed up for a fixed rate offering.

“Some customers are being caught out by the big banks lifting their fixed rates and I have one client who has lodged a formal complaint after his rate was increased three times before the loan was approved,”

“He made the decision to go with that bank based on their rate, and with his settlement date approaching, he does not now have the luxury of time to change lenders, effectively trapping him.” Ms Giovinazzo said.

Banks have been taking weeks, if not months to settle loans and this sort of practice can potentially cost customers thousands if rates are lifted during the process.

“We have seen a frenzy of fixed rate increases by the big banks with the Commonwealth Bank raising rates four times in just two months, with more than a whole percentage point added to its four-year fixed rate since the middle of October.”

Ms Giovinazzo said although the Reserve Bank of Australia (RBA) has stated it doesn’t see conditions for a rise in the current official interest rate of 0.1 per cent until 2024, some economists expect the RBA to act sooner while there are also predictions of banks lifting rates out of cycle due to cost of funding issues.

RBA data also shows Australians have been over $25 billion worth of transactions on their credit card in November, the highest value since 2002. Debit card transactions were also hitting record highs at the end of 2021 hitting over $43 billion, totaling almost $69 billion on both personal credit and debit cards.

The east coast of Australia had come out of lockdowns, COVID cases were relatively low and big retailers were offering discounts in the Click Frenzy, Black Friday and Cyber Monday sales which could have attributed to the record highs, however this debt accruing interest in credit cards has risen $74.8 million month-on-month – the first time it’s gone up since May 2021.

“Australians went on a post lockdown spending-spree, making the most of being able to go to the shops in the pre-Christmas sales.”

“The issue for many Australians who overspent on their credit cards or buy now pay later accounts is that they may now have trouble paying it all back.” Said Ms Tindall.

“This problem could get worse over the next couple of months, especially for people impacted by COVID who haven’t worked the hours they were expecting to.

“Anyone struggling to make their credit card or buy now, pay later repayments should call their provider and ask for help before getting stung with late fees and interest charges,” she said. 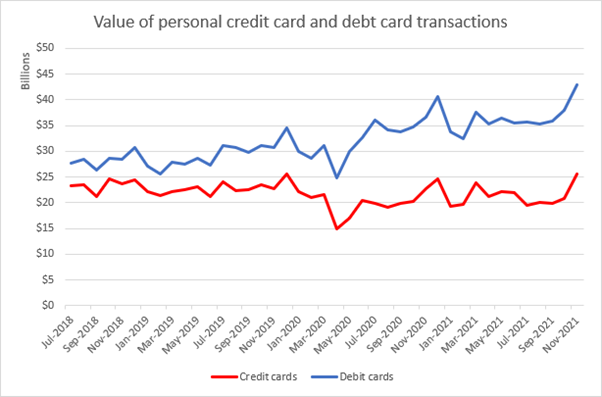