House price growth continues to outpace unit price growth, however, the gap is closing between the different product types.

Supply in Brisbane remains tight, and off the back of the floods it is possible that this trend will continue in the months ahead.

Total advertised stock levels are 25.9 per cent lower than they were 12 months ago. This is also more than 40 per cent below the previous five-year average level. Even new listings are lower compared to the equivalent period last year.

When comparing listing volumes in Brisbane with those in Sydney and Melbourne, it is apparent higher stock levels in the other major capital city markets have normalised.

A larger volume of properties is coming on the market in Sydney and Melbourne, in combination with a drop in buyer demand, which is very different to what is being experienced in Brisbane.

Sales volumes in the Queensland capital are still very high. Brisbane has seen a 62.8 per cent annual increase in the number of transactions across the city. 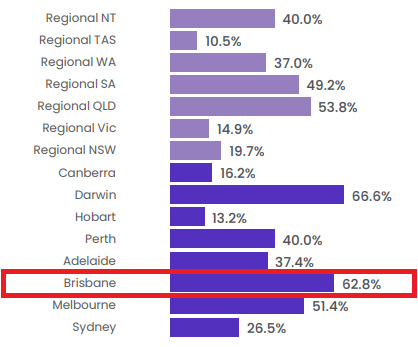 Sales activity is 39 per cent lower than a year ago in Sydney and 27 per cent lower in Melbourne, however, sales volumes have increased in Brisbane over the same period, indicating the market is at a different stage in the cycle to other major capitals.

Interstate migration patterns paint a clear picture of where housing demand is coming from in Queensland. Throughout the September quarter, net migration into the state reached a new record high, equating to about 1,263 new residents every week.

Employment growth in Queensland has also been spectacular over the last 12 months. This is indicative of an improving economy off the back of the lockdowns.

The issue in Brisbane is where everyone is going to live if the population keeps growing rapidly? The city already has extremely low vacancy rates and listing volumes remain well below the long-term trends.

The low supply and high demand environment is likely to remain unchanged for some time yet, which will continue to support price growth in dwelling values and rents.

Rising inflation and interest rates, and diminishing consumer confidence will potentially dampen demand for some buyers but at this stage the effect is unnoticeable.

The latest Hedonic Home Value Index data by CoreLogic released on 1 April, for the month of March, confirmed that the median dwelling value in Brisbane increased by a further 2.0 per cent over the month, outperforming the previous month.

This price growth is more than February. The current median value for dwellings across Greater Brisbane is now $749,293, which is $26,860 higher than one month ago.

Annual growth for the last 12 months for Brisbane dwellings is now 29.3 per cent.

Brisbane’s middle segment of the market is still the top growth segment, ahead of the top end of the market in terms of quarterly price growth for all dwellings, a trend observed for the past two months. 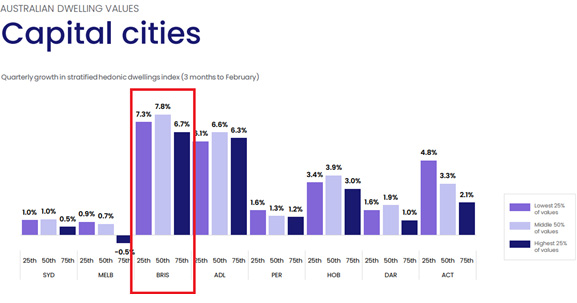 All segments of the market in Brisbane have passed their peak growth rate according to the data above. While all segments are still experiencing strong price growth, the rate of growth is starting to slow.

The Brisbane housing market is still the top performing market across all capital city locations.

Median values for the greater Brisbane region increased a further 2.1 per cent throughout February 2022.

The rate of growth increased again compared to February where the growth rate for housing in Brisbane was 1.9 per cent.

Another new record median value was achieved this month. The 12-month change in Brisbane house prices has been 32.1 per cent per cent, which is still the strongest 12-month house price growth across all capital cities as well as rest of state regions throughout Australia, according to CoreLogic data.

The current median value for a house in Greater Brisbane is now $856,731, the highest it has ever been and $28,556 more than just one month ago.

Unit median values in Brisbane were up 1.6 per cent this month, compared to 1.5 per cent last month, so the momentum is picking up in this segment given there has been three months of consecutive price growth increases.

Vacancy rates at a city-wide level in Brisbane fell again between January and February 2022.

North and southeast Brisbane are at just 0.6 per cent, while there is some respite for renters in the CBD, with a 2.6 per cent vacancy rate.

Off the back of the Brisbane floods last month, it is expected vacancy rates will tighten further, creating uncertainty for tenants who are looking to relocate throughout the Greater Brisbane region.

Housing rents in Brisbane have shown an annual growth rate of 11.6 per cent to the end of March, the highest rate of growth in rents across all capital cities throughout Australia.

Rental incomes in the unit market throughout Brisbane have seen an annual increase of 6.8 per cent.

There are definitely some headwinds for property markets around the country.

The looming federal election creates a level of uncertainty for many. There are inflationary pressures, with the rising cost of living will possibly weighing on housing demand, and there is the risk of rising interest rates.

Brisbane remains relative affordability compared to Sydney and Melbourne and is also in a very low supply environment, unlike the larger capitals.

In Brisbane, an improving economy and low unemployment levels could lead to income growth helping to maintain housing demand.

The announcements from the recent budget have also meant more incentives for first home buyers. Additionally, overseas migration will be positive for maintaining housing demand as well. In Brisbane, the rate of interstate migration also remains strong, putting further pressure on the market in the months ahead.

There has been a shift in demand towards attached dwellings throughout the city, mainly townhouses, which is a segment of the market that could perform strongly.

Buyers are priced out of houses in the inner and middle ring suburbs of Brisbane due to the recent price growth that has been observed, and therefore may compromise on the property type. Demand in this segment of the market is very strong.

Despite the recent floods, international unrest and other downside risks, the fundamentals are still in favour of price growth across all market segments in the foreseeable future.