Brisbane property owners are making more than $23,000 a month while watching the grass grow.

Brisbane property owners are making more than $23,000 a month while watching the grass grow.

That’s the amount the current median value for dwellings across Greater Brisbane has increased in the past month.

In the first month of the year, Brisbane has again cemented its place as the fastest growing capital city in Australia. This is the third month in a row growth in Brisbane has outpaced the other capital cities.

The main differences between Brisbane and the larger capital cities of Sydney and Melbourne relate to affordability, much tighter supply and different demographic trends.

There is no longer a synchronised and broad-based upswing across all markets.

In the more expensive markets of Sydney, Canberra and Melbourne, the higher property prices make it difficult to save a deposit. The median value for a house purchase in these three cities is now above the $1,000,000 mark, whereas Brisbane’s median house value has only just exceeded $800,000 this month.

Growth has been substantial over the last 12 months in Brisbane but property prices are still comparatively more affordable than the other major capital city markets in Australia. Annual growth for the last 12 months for Brisbane dwellings is now more almost 30 per cent. 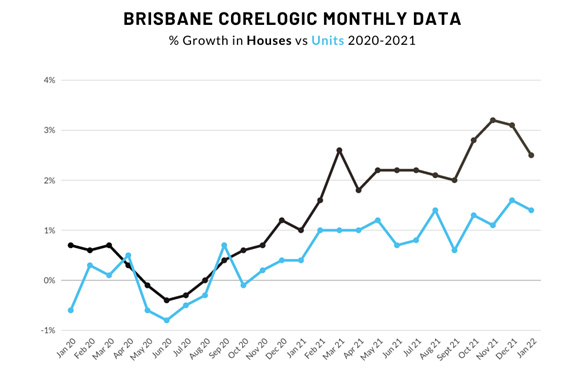 Supply continues to be an issue in Brisbane, with total listing volumes tracking 38 per cent lower in January 2022 compared to 12 months ago.

Moving into the early months of 2022, the number of new listings coming through will determine if supply starts to creep up, thus absorbing some of the consistently strong demand that Brisbane has been experiencing.  Time will tell.

Domain’s head of research and economics, Dr Nicola Powell, has revealed that 26 per cent of property inquiries in Brisbane over the last quarter of 2021 came from southern home hunters.

This increased demand within a market already battling with very low supply is continuing to put pressure on prices.

Despite the rapid onset of Omicron and COVID-19 in Brisbane and Queensland as a whole, and case numbers escalating rapidly, this has had little impact, if any, on the Brisbane property market.

Agents have reported that some sellers are a little more reluctant to have large numbers of people through their homes and therefore have delayed listing until the peak is passed.

Others have said sellers have had to delay their sales campaign because they have contracted COVID-19 and therefore have been in isolation. This places slightly more pressure on an already low listing volume market.

The trend emerging over the last two months is the middle and lower value properties have been growing at a slightly faster rate than the top segment of the market, despite the highest value properties continuing to lead growth over a three-month period.

This may be reflective of affordability constraints starting to show at the top end of the market.

The Brisbane housing market continues to lead the nation in terms of monthly price growth.

Median values for the greater Brisbane region increased a further 2.5 per cent in January.

The rate of growth has slowed down for the second month in a row, down from the November 2021 high of 3.2 per cent, followed by 3.1 per cent price growth across December.

In another landmark, the 12-month change in Brisbane house prices of 32 per cent is the strongest 12-month house price growth across all state capitals.

The unit market in Brisbane experienced slightly softer growth throughout January but still reached a new record high. Unit median values in Brisbane were up 1.4 per cent this month, compared to 1.6 per cent last month.  The 12-month growth for units across Brisbane is now at 12.7 per cent.

There is an expectation that 2022 will remain strong and property price growth will continue in Brisbane.

With so many buyers competing for such limited inventory, competition should continue to drive prices.

Unless there is an unexpectedly large volume of new listings coming to the market in the next few months, the trajectory for continued price growth remains unchanged.

The headwinds that could cloud the future include potential interest rate hikes, a federal election and tighter credit availability.