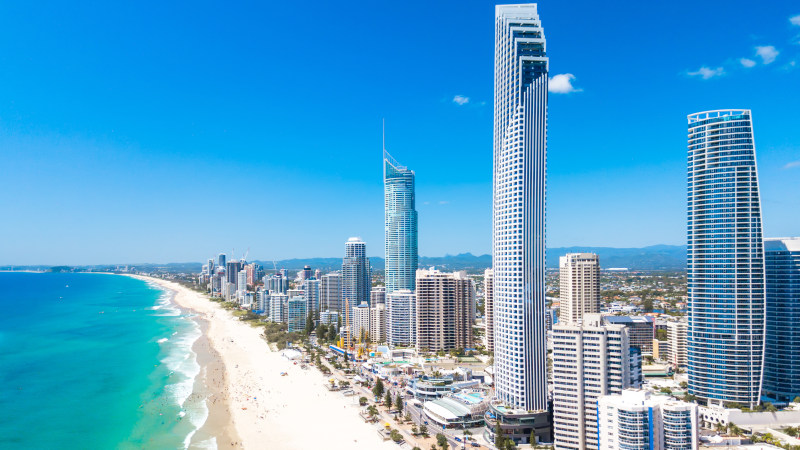 Gold Coast apartments are selling at their fastest rate on record, resulting in the most acute shortage of apartments the region has ever experienced.

For most of 2021, real estate agents and property developers up and down the Gold Coast have been describing sales conditions as one of the biggest booms on record.

Those anecdotes about the hottest Gold Coast property market in memory have now been backed up with data, with apartment sales setting records, according to the latest analysis from Urbis.

The planning and property economics consultancy’s latest Apartment Essentials report for the Gold Coast showed there were 680 apartments sold in the September quarter.

That took the total number of new apartments sold on the Gold Coast to an all-time high of 1,882, eclipsing the previous full-year record of 1,556 sales in 2016 with three months still to run.

As a result of the record sales, apartments are now in short supply, with Urbis estimating it would take just 2.2 months to sell the 517 apartments being marketed, if no new projects were released and current sales rates were maintained.

Current levels of supply are concentrated around Labrador, Southport, Main Beach, Surfers Paradise and Broadbeach, with those suburbs containing 335 apartments for sale.

The Southern Beaches from Mermaid Beach to Tweed Heads had the lowest supply, with just 45 apartments available for sale.

Urbis senior consultant Lynda Campbell said the Gold Coast apartment market had entered new territory, with that supply level the lowest on record and down from 4.2 months in the June quarter.

“Record demand is meeting record low supply, which has led to the most acute shortage of apartments ever experienced on the Gold Coast,” Ms Campbell said.

“We have never seen a market as tight as this since we started keeping track of demand for new apartments at the end of 2013.

“Sales in the third quarter picked up significantly compared to the June quarter, although they were slightly lower than the record first quarter when we saw 742 sales.

“All Gold Coast precincts are in major undersupply, and some areas will remain so despite a number of big projects in the wings expected to be launched over the next three to nine months.”

Local and interstate developers, however, are gearing up to satisfy the record-setting demand.

Sydney-based Iris Capital will soon launch a marketing campaign for its $800 million Victoria & Albert Broadbeach, which will add 401 apartments across two towers to the central Gold Coast suburb.

Azzura Investments is also likely to launch the next stage of its $2.3 billion Imperial Square, after racking up more than $55 million in sales to sell out its first stage, Regal Residences.

Developers having major sales success include Homecorp Property Group, which secured more than $100 million in sales at its Broadwater project Eve Residences, while at the southern end of the Coast, Hirsch and Faigen have started building to sold out projects, Hemingway in Palm Beach and Emerson in Kirra Beach.

S&S projects’ luxury Awaken project, comprising nine full floor apartments, set a new record for a penthouse on the southern Gold Coast, part of $42 million in sales at the development.